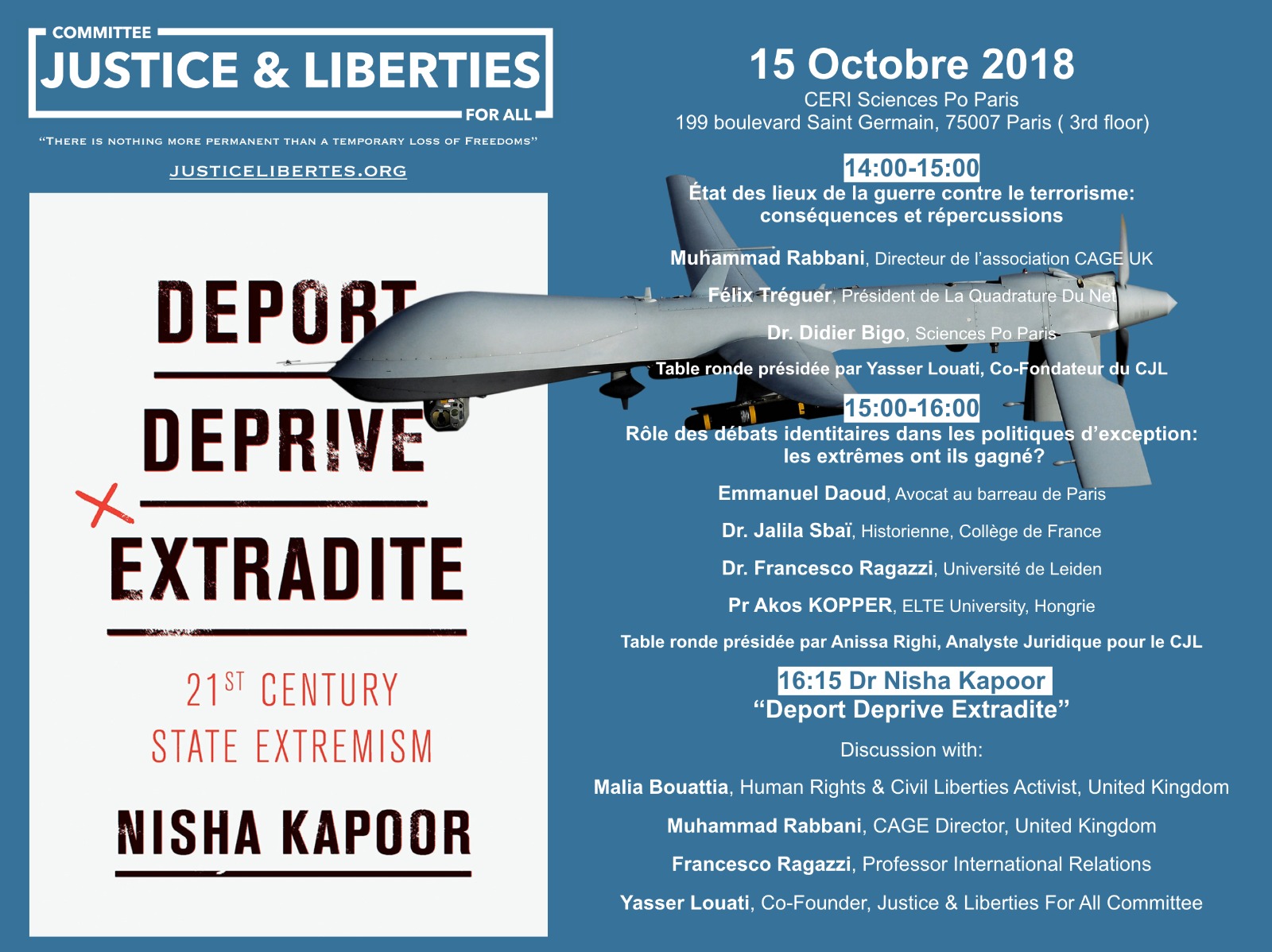 The so called “War on Terror” that was initiated by then US President George W Bush has been going on for seventeen years now. Far from having brought stability to the world, it has lead to its further destabilisation.  To assess the war on terror, the CJL has invited Dr Nisha Kapoor from the University of York so she can present her latest book “Deport, Deprive, Extradite” for an event at SciencesPo Paris. Two roundtables will be held with experts ranging from Pr Didier Bigo (King’s College), Francesco Ragazzi (University of Leiden), Akos Kopper (ELTE University of Budapest), Malia Bouattia (Former Head of NUS) and online privacy advocate Felix Treguer among others.

This year the quiet annual reflections on the 2003 invasion of Iraq were granted slightly more media attention than usual thanks to its quindecinnial mark; yet there remains still a lack of meaningful acknowledgement, and response to, the uncountable death count, estimated by some to be as high as 2.4 million, of the true gravity of the violence inflicted, and of its ongoing and longlasting legacy, not least the destructive politics which it has spurned.

CLICK HERE TO REGISTER FOR THE EVENT: “THE WAR ON TERROR AND STATE EXTREMISM

And as with all wars driven by western imperial powers, the devastating and authoritarian politics driven by imperialist interventions always comes home. The US and UK’s domestic variant of the War on Terror that was cultivated and sustained at home in parallel to the bombs and missiles dropped over Iraq and Afghanistan has bred an arsenal of measures now readily available to the state in the name of securitisation. The mobilisation of popular consensus in support of laxer extradition arrangements with the US, indefinite detention, deportation ‘with assurances’, citizenship deprivation, passport removals, secret justice and more required the identification of a suspect population. Muslims criminalised as terrorism suspects became a suitable target.

And so over the course of the 2000s legislative measures to counter terrorism proliferated and the law helped to legitimate the enforcement of authoritarian interventions that might otherwise be exposed for failing to adhere to human rights and civil liberties. In contrast to extraordinary rendition and its variant ‘rendition to justice’ which were condemned by the Council of Europe, extradition to supermax prisons in the US with the prospect of incarceration for 80-100 years and lengthy periods in solitary confinement was approved by the European Court of Human Rights. These judgements set a precedent, making transfers that were otherwise laborious and deeply scrutinised processes much more viable and much more cavalier. Disciplinary practices that were difficult to achieve, even if theoretically possible in the late 1990s/early 2000s, were being enacted rather quickly and efficiently by 2015.

Legal legitimation and rationalisation of this range of punitive measures has depended on dehumanisation, on the making of non-humans. The racially charged language of terrorism, of the terrorist suspect amongst us, that effectively and explicitly connects imperialism overseas to racism at home, has not only helped to normalise and advance preemptive policing, it has provided a suitable emotive trope against which the most intense authoritarian measures have been institutionalised, seen as valid and necessary to police those racialized subjects demonised to be exceptionally heinous. Terrorism, now the catchall descriptive term used to define the political behaviour of Muslims, is framed as the antithesis of liberalism rather than as an integral part of it, and so used to sanction the most excessive forms of punishment which continuously push the bounds of disciplinary possibility within domestic civilian carceral systems.

Of late, the demonic pantomime tropes of Muslim ‘extremists’ that were incorporated into the earlier phases of the War on Terror and which did much ideological work to secure populist appeal for intensifying multiple authoritarianisms appear less frequently, and when they do at least, do not carry the headlines in the way they once did. There is no longer any need. The ideological work of the War on Terror has been done. The latest phase of this enduring war is in some ways characterised by its militarism of the shadows. Hundreds more are experiencing the authoritarianisms that earlier high profile cases of Muslim men extradited, deported, rendered and/or deprived of their citizenship helped to cultivate with little noise at all. And this is not without broader consequences and ramifications. Indeed, the point about mobilising against the racist nature of policing is not simply to condemn the disproportionate targeting and disciplining of racially Othered bodies but to denounce the more pertinent issue that the pathologisation of black and brown subjects functions as a necessary prerequisite for the justification of the cultivation of authoritarian policing (and related state disciplinary practices) in the first place.

And so this is the rub about extradition. It is not simply that it illuminates the global nature of policing that the War on Terror has relied on and extends, but that it allows the criminalisation and prosecution of the Muslims subjected to it to evade any transparent justice system. It relies on a system of punishment first, prosecution second, and the identification of a crime last of all. It is not simply that it forms part of a system of counterterrorism policing that criminalises non-violent offences, behaviours that in other contexts might be defended as the right to freedom of speech and freedom of expression, a system based on pre-emptive policing and guilt by association. But that it forms part of a system of policing that experiments with a system of justice that has little to do with justice at all, one that evades transparency or independent scrutiny, making use instead of immigration courts, lengthy pre-trial incarceration, citizenship deprivation, passport removals and most recently family courts with increasing numbers of care orders being taken out against parents accused of radicalising their children.

And so the criminalisation of Muslims in the name of fighting terrorism reveals much more about the law and order society several stages further on, about the full scope of security apparatus of the state than it does about the nature of any genuine threat from below. Counterterrorism policing functions to help further advance and harden the security state, it operates to protect the state in the name of national security. High profile terrorism cases help to illuminate, for example, the cultivation and legitimation of a robust system of secret justice that was germinated in immigration courts tasked with the remit of dealing with appeals against deportations on national security grounds. Now, the system of closed evidence allowed for in Special Immigration Appeals Commissions which denies those facing deportation and their lawyers access to all the evidence against them has made its way into other courts too.

At the same time the citizenship deprivation legislation that was fostered in the name of Abu Hamza in 2002 has progressed so that in 2014 legislation was passed which allows the Home Secretary to make someone stateless if she believes they can acquire citizenship elsewhere. When Minh Pham was extradited in 2015 he lost his citizenship too and now sits outlawed in solitary confinement. This, an integral part of the ever expanding deportation regime, sits at the extreme end of a broader trend towards increasingly precarious citizenship where government asserts explicitly and sanctimoniously that ‘citizenship is a privilege not a right’.

CLICK HERE TO REGISTER FOR THE EVENT: “THE WAR ON TERROR AND STATE EXTREMISM 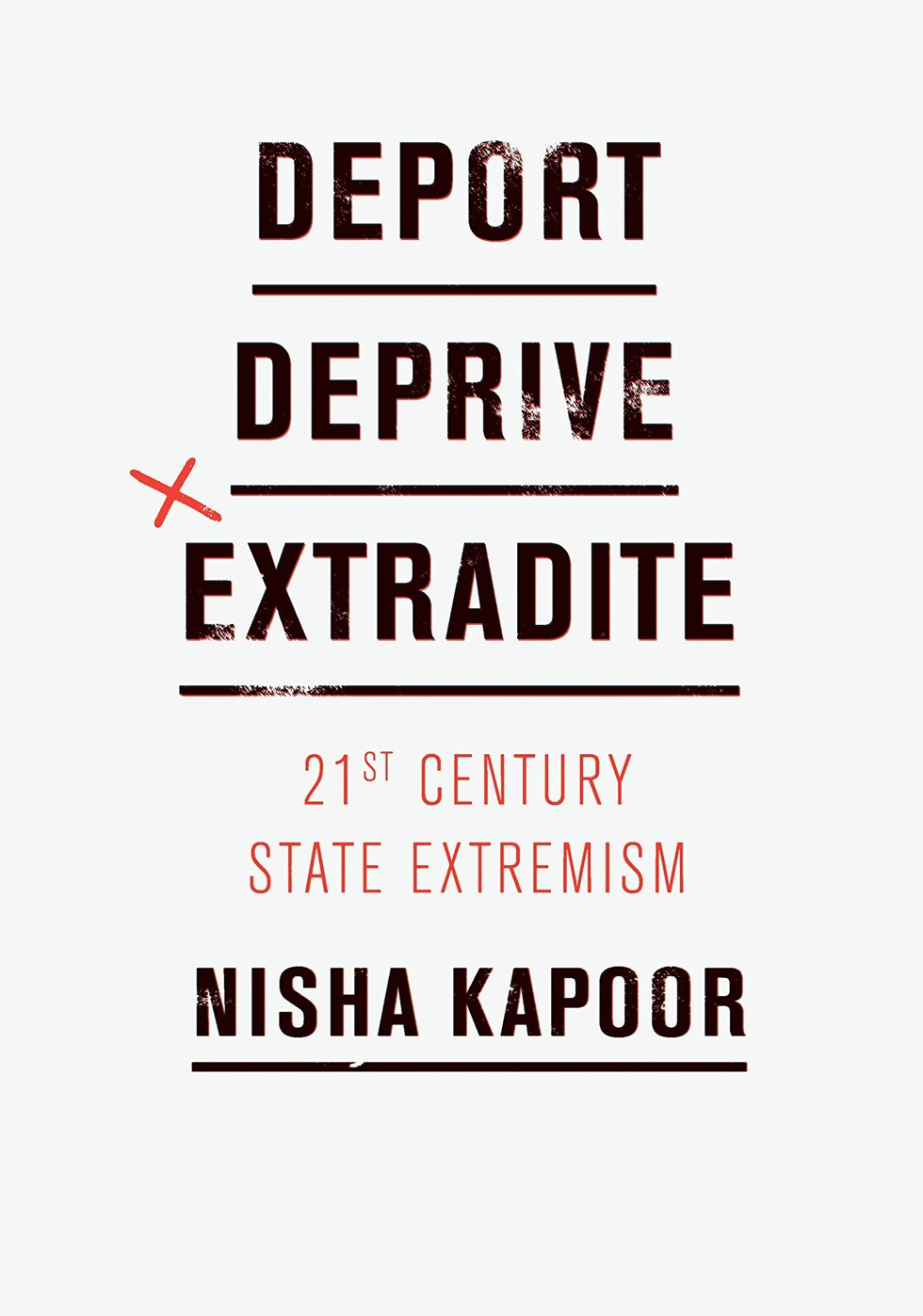 High profile terrorism cases have also been instrumental in mobilising support for calls by government and sections of the (mostly right-wing) media to withdraw from the European Convention on Human Rights, to some extent exposing the lack of genuine regard for inclusive civil liberties and protections, but ultimately enabling a retreat from supra-national judicial oversight of government action. The ambivalent role of the European Court of Human Rights in relation to terrorism cases notwithstanding, the desire by certain sections of the British state to move away from external judicial oversight is part of the same logic underpinning the expansion of secret justice. Namely, it reflects a realignment of judicial procedures in favour of state protection. In the same way that secret courts and secret evidence protect the government from public revelations that it has been complicit in practices that contravene standard democratic principles, such as involvement in torture and clandestine detentions, part of the desire to circumvent the European Court is to impede judicial checks that constrain and admonish the state for its disciplinary excess, not least those military interventions inflicted on Iraq.