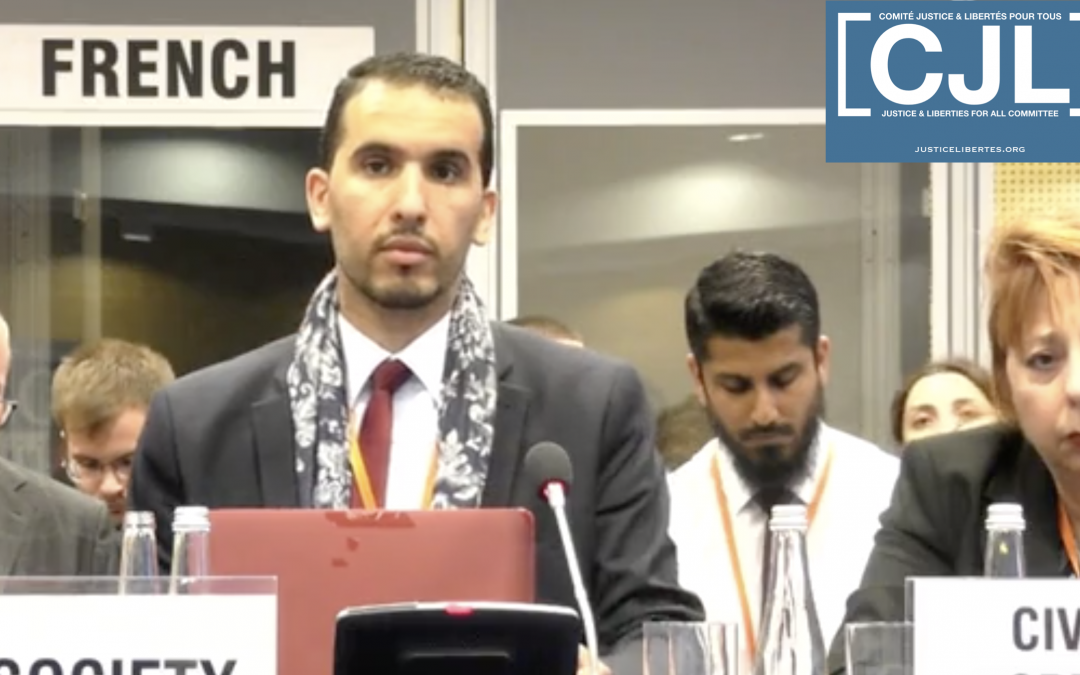 While ideologues and political activists have turned public services into their own platform of choice to hammer violent anti-Muslim rhetoric which they no longer conceal, the Justice & Liberties For All Committee (CJL), a Paris based transnational human rights organisation, was at the OSCE’s annual conference HDIM 2019 which is the biggest human rights event in Europe.

The CJL’s President Yasser Louati took the stage to confront the French State and report on what minorities face in France.. In his address during the plenary session on discrimination towards minorities, Mr Louati pressed the French delegation to act against public servants whom are using taxpayer’s money and public institutions to spread white supremacy ideology, calling for the banning of non white minorities from public space and inciting hatred towards Muslim women wearing a headscarf:

“Here we are again calling out the daily discrimination experienced by millions of people across the OSCE member states.

Unfortunately, these countries represented here show such ill-will, that one can only speak of an abdication at best, a complicity at worst.

In France, discriminations targeting Muslims, Blacks and Roma peoples are no longer to be proven; a plethora of studies published over the last fifteen years have constantly demonstrated the structural nature of racism which is expressed by discrimination in school, at work, in access to healthcare, racial profiling and harassment by the police on the streets, exposure to terrorist violence and, regarding Muslim communities, state violence under the pretext of fighting terrorism.

Because racism against Muslims has become acceptable and even respectable for some, we point to the responsibility of the French state that chooses to remain silent when its agents promote white supremacy (theory of the great replacement for the right, cultural insecurity for the left) and the ensuing terrorist attacks as we all witnessed it in Christchurch.

Using the fight against anti-Semitism to minimize the dangers of white supremacy and confronting Jews and Muslims is simply a shame.

When the Minister of National Education stresses his desire to prohibit muslim women wearing a headscarf from access to education and work, or when a teacher compares them to terrorists, it is no longer a question of freedom of speech but the use of official positions to portray Muslims as the enemy within and thus to encourage violence against them.

The CJL therefore recommends that the French State:
_Reaffirms the requirement of neutrality from its agents and to prohibit them from promoting their world views. The public service is not meant to be a network promoting racist ideologies.
_Sacks any agent who calls for hatred, violence or discrimination.
_Conditions the awarding of press subsidies to the non-dissemination of racism and hate speech, and that individuals found guilty by the courts for such remarks no longer have access to them. Public funds can not be used to promote racism, let alone finance a march towards civil war. “