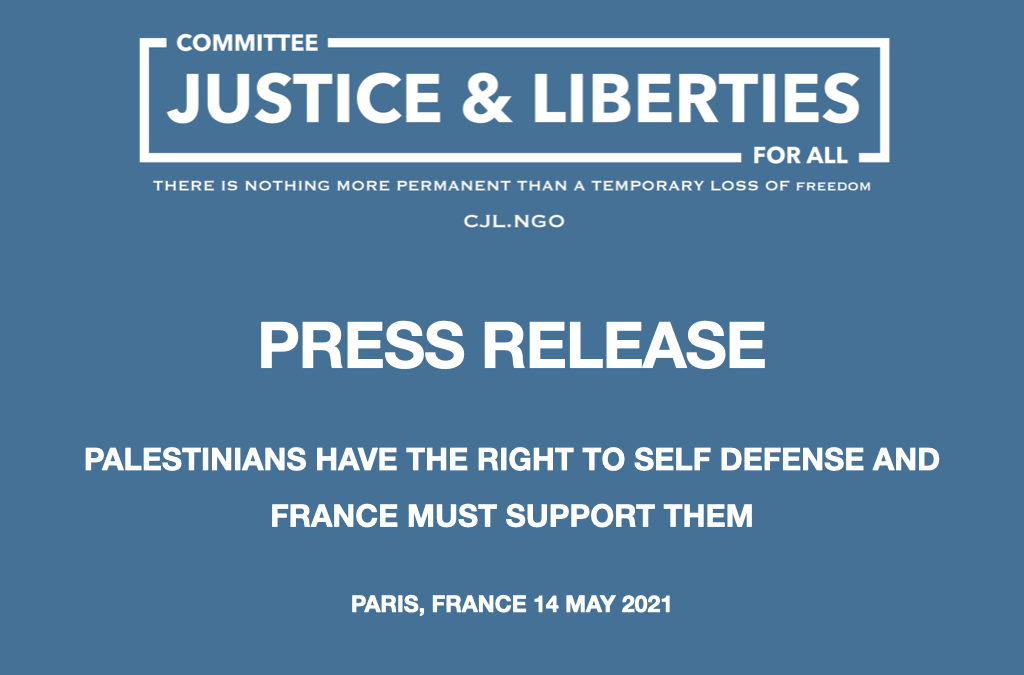 The Committee For Justice and Liberties (CJL) strongly condemns the brutalizations by the Israeli regime against Palestinians in occupied East Jerusalem, and its broader military assaults on Palestinians across the territory over the last few day – especially in the Gaza Strip.

The recent events were brought on by the announced forced evictions of hundreds of Palestinians who are being replaced with Jewish settlers in the neighbourhood of Sheikh Jarrah. Demonstrations calling for the ethnic cleansing of Palestinians were also organised, and thousands of settlers marched in the streets of Jerusalem chanting “Death to the Arabs”. The Israeli Defence Force (IDF) responded by protecting settlers committing wanton acts of violence against Palestinian protestors who have been opposing their unjust treatment.

Simultaneously, Israel has ratcheted up its assault on the Gaza strip, launching repeated aerial assaults and amassing thousands of soldiers in an apparent preparation for a ground offensive.

One resident of Gaza told the CJL that after living through three separate Israeli assaults on the besieged area in the last 15 years, the night and morning of 11 May was “the most brutal, aggressive shelling campaign” he had experienced yet.

With the current investigation underway by the International Criminal Court (ICC) on past war crimes committed by the state of Israel, the least that should be expected by the French government is a condemnation of the ongoing killings of Palestinians. It is no time for timid declarations, let alone total silence.

The occupation of East Jerusalem where Palestinians are being violently thrown out of their homes has been referred to as constituting a war crime by the United Nations – especially in light of the systematic transfer of settlers into the area to replace the indigenous population.

But what is commonly referred to as the « International Community » has failed Palestinians for decades and has done nothing which would have forced Israel to stop committing its crimes. There have been no significant political, economic, or diplomatic consequences for its actions instead, western states continue to offer Israel preferential economic relations and selling it the very weapons used time and time again against Palestinian civilians. This amounts to more than facilitation. It is complicity.

The current crisis is no anomaly, nor the outcome of a recent radicalisation. All of Israel’s policies towards Palestinians contribute to the aim of completing the ethnic cleansing of Palestine which began in 1948 when at least 700,000 Palestinians were expelled and hundreds of villages and urban centres were destroyed. Today Palestinians make up the world’s largest refugee population. Their refugee status can be traced back to this expulsion by Israel at its inception.

The CJL stands in solidarity with Palestinians and supports their inalienable right to defend themselves, to return, and to resist the illegal occupation, annexation and blockade of their land as well as the destruction of their homes and crops.

The CJL calls on all French civil society organisations, concerned communities and individuals to:

–Call on all state representatives to halt any bilateral agreements with Israel until the occupation and blockade are lifted and refugees have been allowed to return home.

The CJL calls on the French government to:

–Call for an urgent UNSC meeting and demand an international arms embargo on Israel.

–Send the French Navy on a humanitarian mission to break the sea blockade of Gaza.

–Prohibit any French citizen from joining the israeli military and to prosecute any one of them who is involved in the ongoing war crimes against Palestinians.