france banned marches for palestine: we went any way and will do it again 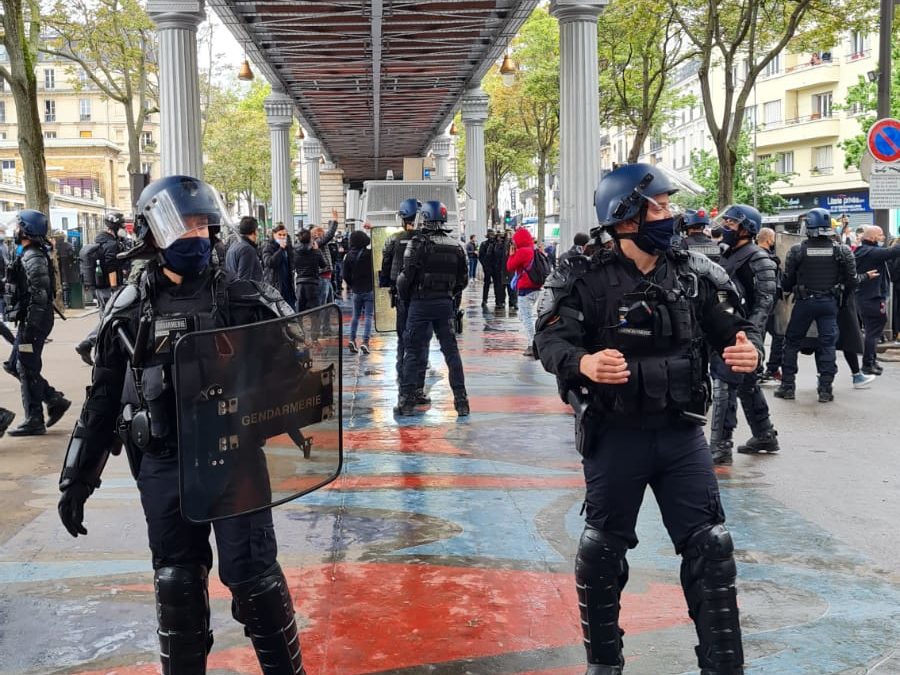 As the CJL announced in its press release on 14th May, demonstrations in solidarity with the Palestinian people were maintained, despite considerable repression of protestors.

On Nakba Day (15th May) several demonstrations in support of the Palestinian people following attacks in Gaza were planned across France. In the capital city, at the request of Interior Minister Gerald Darmanin, the planned protest was banned on the grounds that it could be a disturbance to public order. However, thousands of protesters defied the ban.

From noon on Saturday, many metro stations were closed. The aim of this was to prevent the pro-Palestinian demonstrators from going to the Parisian neighborhood of Barbes where a march had been scheduled to begin from 3pm and continue in the direction of Bastille. Despite the ban, confirmed the day before, organisers and many supporters maintained the calls to show solidarity over social media. Many walked to the confirmed meeting point in Barbes, despite the distance and the poor weather. Protestors were met with heavy police presence. Around 4,200 police officers and gendarmes surrounded the area.

“We are all Palestinians”

Chants by demonstrators in Paris

3 pm, supposed to be the start time of the demonstration, marked the beginning of police warnings, leaving many demonstrators dumbfounded. Within moments, state officials began to physically push back the crowds.

Along the Boulevard de la Chapelle, demonstrators responded to orders to disperse by chanting “Israel assassin, Macron accomplice” and “We are all Palestinians”. Facing the water cannon, some brandished Palestinian flags and placards which read “Give up your colonies” and “Palestinian lives matter”.

Linda M, an executive in Human Resources for skytrain, admits that the ban has only motivated her further, “I’m a little unwell. If the protest had been allowed, I probably would have stayed in the comfort of my home, since others would have joined [the demonstration]. But this ban outraged me. It was important to be there. Paris is the only capital to have taken such a step!”

It only took 15 minutes for the water cannon to start spraying the crowds, which retreated briefly but then soon returned. “The tear gas and the water cannon are nothing compared to the bombardments suffered by the Gazans,” explained a protester. The forced dispersal led to the creation of several smaller demonstrations scattered in the streets of northern Paris.

“My friend and I were wearing a Kuffiyyeh and an officer recognised that we were going to the demonstration.” The four of them were fined 135 euros”

Habiba Bigdade 43, a human rights activist, was amongst those unable to reach Barbes. “Alongside three friends, we parked on the Anvers side, the police were searching bags. We made no attempt to avoid [police] control. My friend and I were wearing a Kuffiyyeh and an officer recognised that we were going to the demonstration.” The four of them were fined 135 euros for participating in a prohibited demonstration. “It was 2:15 pm. We were still far from the meeting spot” stated a young woman who we spoke to after the demonstration.

For several hours, the north of Paris became the setting of a cat and mouse game, with dispersed demonstrators wiping away tear gas sprayed at them, and CRS charging forth. The Brav’M (Motorized Violent Action Repression Brigade) was also all over the area.

A lot of solidarity was expressed from the windows of many of the neighborhood’s buildings, as well as by drivers honking in support with demonstrators. Some shop owners opened their doors to protestors, including a bakery on Avenue Max Dormoy where several young demonstrators in tears due to the gas sprayed by the police, came to buy milk and take refuge.

Azdine M., a plumber, was determined to come despite the ban. “In France the right to demonstrate is a constitutional right. We are in a country of freedoms, we have the right to say what we think “, asserted the 44-year-old father.

An artist spoken to on site explained, in relation to the media’s growing turn to the extreme right: “we are entering an era of incredible propaganda. Even the mildest positions are singled out as radical ”.

Some demonstrators congregated at the Place de la République, while others continue to be chased by officers around the Barbes metro station.

At the end of the afternoon, demonstrators dispersed – to the dismay of those who had hoped for protests would continue. Neither an anti-Semitic sign nor slogan was noted and No major clashes were recorded. The police reported 44 arrests.

Against the tide of other major cities like New York, Chicago or Brussels where thousands of people were able to gather peacefully to show their support for the Palestinian people, the ban in Paris was completely unfounded – especially in a country that prides itself on its supposed upholding of Human rights.

The death toll in Palestine has further increased, with no action from the French state in order to put a stop to it. Over 200 civilian have been murdered, including 59 children and 35 women. Israel continues to shell the Gaza Strip, destroying apartment buildings, newsstands, bookshops, and even cemeteries.